Meet Chris Holland. Chris is a U.S. Navy Veteran and a recent graduate from the University of West Florida. During his time in the Navy, Chris was trained as a Hospital Corpsman. His training included emergency medicine, nursing practices, phlebotomy, medical documentation, and much more. Chris utilized this training throughout his time in the military to help provide medical care to service members and their families.

Due to injuries sustained while in the service, Chris’ military career was cut short. It was then he realized that, though the Navy had trained him well, they did not supply the certifications to qualify his training in the civilian sector. That was not going to stop him though. He put his military education benefits to work and pursued a bachelor’s degree in Healthcare Administration which he completed this summer. He did not know that completing his degree would produce its own set of challenges. 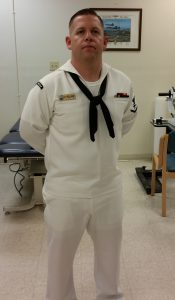 A 3rd generation Navy veteran, with years of medical experience, a family to support, and now a college degree finds himself unable to find employment in the civilian sector. When he applied for a Physician Office Manager position, they told him he did not have enough experience with revenue cycle functions — something that a Corpsman is not exposed to in military medicine. He then applied for Front Desk positions at medical facilities. Chris thought that if he started at the bottom, he could “earn his stripes,” and have the opportunity to show them what he could do. He was told, however, that he is too educated for these positions. “Why would someone with a bachelor’s degree want to work the front desk?” they ask him. He is stuck between not having the experience that employers want for the jobs at his education level and being overqualified for the jobs at entry level.

It was then that Chris connected to fellow Navy veteran and President and CEO of VetCV, Niels Andersen, through a mutual contact. Niels educated Chris on the importance of building a strong network of contacts. Niels also pointed out to him that he and other veterans were “trained to be trainable” during their time in the service and he needs to make sure to emphasize this competitive advantage over other candidates for the job and the value this brings to an employer during an interview. Their ability to quickly and efficiently learn new tasks is often undervalued, underestimated, and underutilized by civilian employers. It’s his job to point out the fact that the DoD invests on average $422,000 over a 4-year enlistment in training and this translates directly to the bottom line of an employer by decreasing the onboarding time, ability to solve complex problems quickly, and efficiency at getting at the work at hand.

Chris Holland is one of many veterans who face challenges when re-entering the civilian workforce. Employers do not seem to understand the potential these valuable candidates have if only given the opportunity. 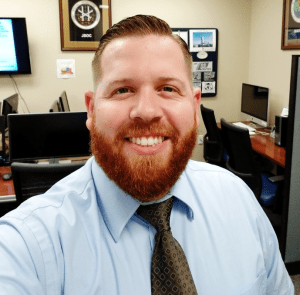 Chris was fortunate to have had the opportunity to have worked at the University of West Florida (UWF) Military and Veterans Resource Center while he was a student. He is extremely thankful to UWF for all they do to support and work with Veterans. UWF ranked No. 5 in the nation on the list of military friendly schools. Their Military and Veterans Resource Center is one of the reasons it makes this list and is led by Navy Veteran, Marc Churchwell. Marc does a great job with connecting community industry with Veterans when they need help.

At VetCV, we as a team are working to create a place where Veterans, their family, and friends, can seek help through all of life’s difficulties. At one point in each of our lives, we have been jobless, working on or with a degree, and willing to work in any position to provide for our families.

Chris is located in Pensacola, FL and is actively searching for a position with a company that is immediately hiring either for his skills or in a position that will give him an opportunity to show the value he can bring to an organization. Our sole mission at VetCV is to help people just like Chris and his family so call us at 850-441-2008 if you’d like to reach out to Chris or connect with him on LinkedIn.